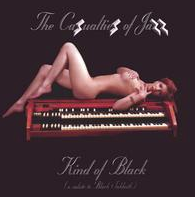 The Casualties of Jazz met up on the west coast while working with other touring and recording acts. The trio got their name from their two-year stint playing Monday night “casuals” at a beloved local bar in Burbank, California. The rhythm section, Chris Golden and Jimmy Paxson jr. , were performing on Rod Stewart’s Great American Songbook Vol. II when they met J.J. Blair, who was engineering the session. It was during these sessions that the concept for this record was realized. The third member of their trio, Matt Rohde, was recruited to play Hammond organ for the project.